Between 2nd and 13th May

public opening 13th May at 9pm
Mohamed Shafik / Anfoushi shipyard
With the collaboration of Anfoushi’s fishermen.
Re-build, repair, gather together scattered pieces in order to reinvent new shapes, starting from a world which is desincarnated, deconstructed, and with no illusions. 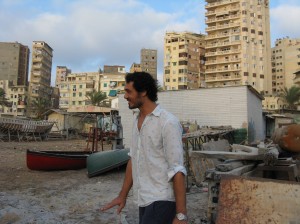 Egyptian dancer, director and musician, he worked as a dancer for the National Company for folkloric arts then for the Modern dance Company, Cairo opera House, where his understanding for dance and creation changed. Mohamed presented his first work as director “When things happen” with a group of young actors and won the first award in the experimental theatre festival in Cairo. Directed many performances in and out of Egypt, such as Homma, Hadid;  Seven color of a birthday;  and Witness of the body. Mohamed is now considered as one of the few representatives of the new Egyptian generation of choreographers, and his work is acclaimed in Egypt and abroad, where he is regularly invited to take part in artistic festivals.